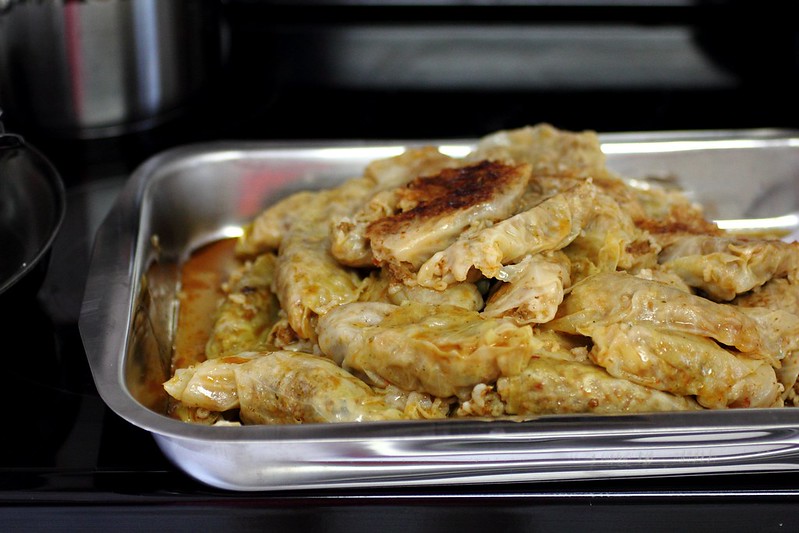 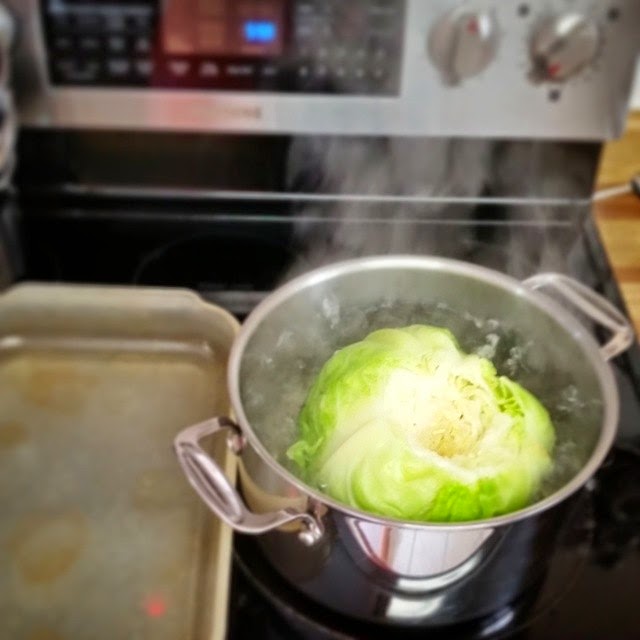 Here at AdventuressHeart we've done a lot of Dolma, and we covered Cabbage Dolmas as well as many Arabic style stuffed veggies. Today's post is really more of a reference and note to self (that's how my blog came about, publishing recipes for future references and for my sisters to hold on to foods from our rich cultural background)
Here are some of the older posts for Cabbage Dolma
Soak rice:
2 cups calrose rice, washed, rinsed and soaked for about 30 minutes to an hour
Prep Cabbage:
Bring a big pot of salted water to the boil. Remove the core of the cabbage and any outer leaves that are a bit soiled. Place the cabbage head into the water core side down and let it boil away on medium high for a couple of minutes.  Gently flip the cabbage over in the pot of water, now core side up, use a fork and spatula to carefully remove the outer leaves and place them on a nearby tray.  Return the cabbage to it's original position (core side down) and allow it to cook a little more, continuing the process of flipping back and removing a few leaves at a time and letting it boil further on it's core until all of the leaves have been removed. Don't worry about the tiny leaves in the core towards the end, just remove it and set aside.
For the big leaves I cut out the rib/shaft and cut it into 3 pieces for easy and even stuffing/rolling. 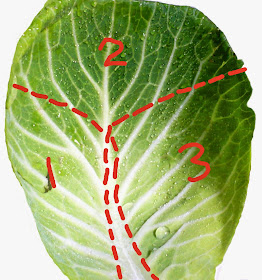 Reserve some of the water from boiling the cabbage and dissolve the following tamarind paste into it, simmering for a while if needed..

In a large pot heat the oil and tomato paste, fry it around until it smells nice and caramelized. You don't have to do this step but it really adds another level of depth to the flavour. I love my tomato paste roasted. Use a spatula to scoop it out and add it to your puree mix.

Drain the rice, mix it with the raw ground lamb, add the spice/herb puree and season with 2 1/2 tbsp salt (usually the rule is about 1 tbsp per cup of rice and with the lamb I added more to season it too)

In a large heavy bottomed pan drizzle a bit of olive oil and begin stuffing your cabbage leaves with the rice/lamb mixture. Simply add about 2 tsp of filling onto the bottom portion of the leaf and roll upwards like a cigar, nothing too neat or fancy and you don't have to tuck the ends in like I do with the grape leaves. Start with the smaller leaves as you can just use them whole and then use the outer leaves which you've had to remove the ribbing and divide into smaller pieces. Place the stuffed cabbage leaves into the pot layer after layer until you're done!

Place the pot on the heat (I start on high) - I tend to let it sizzle a bit since I've added oil to the bottom - we like ours really browned/burned!  Using a small heat proof plate set inside the pot and on top of the dolma to keep everything in place you can now add your liquid.

Heat the tamarind/cabbage broth up or if it's still hot simply add it over the top gently. You should see the liquid rise up between the cabbage but not cover it entirely ( remember the leaves and meat will all release more juices to cook the rice)

Drizzle juice of 1 lemon over top and you're ready to cover and simmer until tender. Cook for about an hour on low.

When it's done it will smell amazing and the rice will be cooked. Remove from heat, remove the plate on top (gently as it's hot!!) and set the pot aside to cool slightly. You can remove the stuffed cabbage leaves one by one or flip over the whole pot on a big tray which is how we like to do it. It's not only fun but a bit of table side theatrics!

P.S I'd like to thank Mabel Younadam from Youtube for the inspiration to add Tamarind to the dolma, I've never done it this way before, normally we got used to using pomegranate molasses but tamarind is a lovely change!